‘The Front Door’ by Barbara Jaques 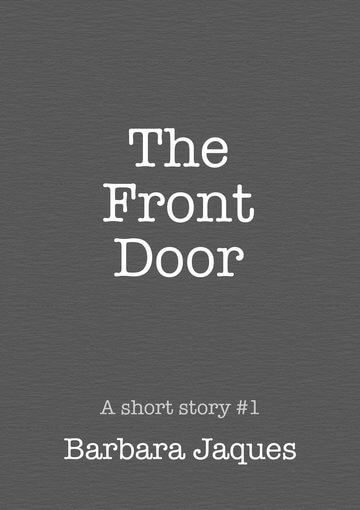 The rental agent doesn’t know he looks smarmy. ‘Please come in,’ he is saying, ‘It’s so cold out there. You must be freezing. And the air is terrible today, worse than yesterday, don’t you think?’

And he doesn’t understand that nobody buys into the casual friendliness of his manner; that all they see is the grease of his hair, not the slick. In the doorway of this oh-so modern house he looks out of place, a man picked up from some other time and dropped into this. Pinstriped suit and spats, only the pencil moustache is missing.

They enter, the man and woman who so far have only smiled. They are not like you or me.

‘Why, it’s beautiful,’ the woman gasps, eyes widening as she scans the room, ogling the house and space, the opportunity. And she is also beautiful. Her groomed hair is platinum blond; eye lashes thick and long, skin creamy white. In some ways she is a match for the agent, though far out of his league. She unbuttons her fine wool coat – red as those painted lips – because the house is warm. Beneath it, a white dress, short and fitted, shows off her bosom and hips. She stands on glossy black heels. I think of Marilyn Monroe.

Behind her I suppose is her husband. He is much older and smartly dressed in a quality green tweed suit. But I can think of no famous face for comparison. This grey haired man seems ordinary. He is clean, ordered, and, I suspect, dull. I don’t mind, for ordinary is no longer. Ordinary has become extraordinary.

She glances back at him, smiling broadly. ‘Darling! Isn’t it wonderful?’

He returns the smile, the sort that involves hauling up semi-pursed lips. He adds a small nod. It means only, I heard you.

As yet, they cannot see anything as I can. As Smarmy the agent can.

The selling begins. ‘They’re everywhere, of course.’ I wonder why Smarmy says this and not something more usual.

‘They?’ questions the man. The woman delivers a backward glance, a small frown that insists, shut up. He obeys. Her face captivates me.

‘They’re all over the house,’ Smarmy continues, ‘I’ll show you as we go round. I know you were particularly interested.’

‘Absolutely. Have you had many viewings?’ exquisite lips enquire.

He is lying. They are the second.

The woman again looks to her husband, but he is distracted by a portrait along the hallway. ‘Very lifelike,’ he remarks.

Smarmy strolls over and looks. He doesn’t say a word but I know what he is thinking. He is thinking that of course it is lifelike.

‘I don’t like it. We could take it down?’ asks the beautiful one. Naturally she doesn’t like it. It is the face of a woman as magnificent as she. Almost.

‘Certainly,’ agrees Smarmy, but we both know it is not as easy as that.

The woman begins to wander and Smarmy makes a sweeping gesture with his pinstriped arm that says, help yourself. She does, touching things as she moves, running polished fingernails along the top of a chair, picking up a Chinese vase, pulling open drawers. She is the star of the show.

After some time her husband speaks. ‘I don’t like open plan.’

‘And the bedrooms are downstairs.’

Smarmy must make himself vital; the pace is too slow. ‘Shall we go down? Or would you prefer to look at the other rooms on this level first? There is an outstanding library at the far end. It’s of a more traditional theme.’

No answer. The couple are having an exchange others cannot hear, a silent yet visible discussion. Eventually red lips part, ‘He doesn’t agree with… you know… them.’

Smarmy doesn’t comment. Instead he takes the pair to the lower level. Stilted conversation reverberates up the bare wooden staircase, Smarmy’s enthusiasm versus the lilting tones of the woman. The first visitors were noisier, their spoiled children rampaging over items that ought to be offered respect.

The volume is rising. They are coming back up; Smarmy is eulogizing about cupboard space. From the top of the stairs they walk straight to the library Smarmy hopes will win over the husband, even though the man’s opinion appears to count for nothing. A fleeting look only, they make appreciative noises and turn away, returning to the main room.

‘I just can’t imagine how it all works,’ gushes the woman. ‘It’s an amazing thing. But where are they? You said you would show us, and yet I…’

‘Here,’ Smarmy bounds to the sofa, his thin legs made skinnier by the vertical stripe of his suit. I think of a spider.

Intrigued, the woman is by his side in an instant. Her husband hangs back, eyes wandering from the building into the thick trees beyond.

‘See here,’ Smarmy points to a leg of the sofa. ‘I can unclip this,’ reaching down, he does. He opens up the wooden leg like a child might an Easter egg, easing one side from the other. ‘You see there?’

The beauty leans in, hair bobbing about her face, ‘I do, yes. I see it.’

‘Feeding tube,’ mutters the husband. He is ignored.

‘And that keeps the whole thing going?’

‘Yes,’ Smarmy refastens the casing. He begins to reel off a list, pointing around the room, ‘each item has one. The pictures, the chairs, the table,’ he turns, ‘that stool, the…’

‘Darling, you know this is the way forward.’

‘Yes. We agreed. Times have changed.’ Her body slackens. ‘It’s not my fault.’ A pout forms. Suddenly I can see the relationship. She is still controlling but more subtly, softening into baby-like submission because it softens him too. It’s a well-played game.

I suppose he feels me watching because he turns. Satisfied nothing untoward is behind him, he turns back.

‘So how do we provide support?’ the woman asks. ‘Assuming we rent the place.’

Her husband sighs. ‘She means how do we feed them.’

Now Smarmy is uncomfortable, but only briefly. ‘Here. I’ll show you. You’ll be provided with sachets like this,’ he pulls one from a drawer. ‘And under here,’ he opens the cupboard below the sink, ‘is the unit. You empty two of these into that little box once a month.’

‘What happens if one goes wrong?’

‘There is always an if.’

Smarmy pauses and then says, ‘Call me. I’ll sort it.’

The woman is satisfied. A shoulder rises a little; coyly she asks, ‘Any time?’

I am annoyed. Because now Smarmy thinks he is worth something when in fact she is playing with him, flirting to obtain support if she needs it. Her husband will not offer it, and she is clearly a woman unused to running her own life, beyond securing its comforts. It doesn’t make her a lesser person. I long to look after her.

She notices her husband again studying the portrait. Her brown eyes catch Smarmy’s black ones and he shakes his head a little, mouthing words of reassurance. He’ll get rid of it.

But now I am wondering: can he?

There is a long silence.

‘The view is spectacular,’ Smarmy says, having for now depleted his usefulness. ‘So many trees. Not to be taken for granted these days.’

By these days, he means our time. Not the time he is dressed for or the happy time of plenty missed by the few who enjoyed it, but now.

‘Who does the garden?’ she says.

‘Two gardeners come with the property,’ Smarmy is useful again. ‘If you can bear the cold, we could go outside. It’s a lovely plot.’

I prepare for them to leave, but she shakes her head. ‘I don’t think so. I’m not dressed for it. I hate being cold.’ She moves closer to her husband and leans against him, holding his arm, softly rouged cheek resting on his shoulder. ‘You keep me warm, don’t you darling.’

For the first time the husband’s smile looks real. He pats her hand, but says nothing.

The three stand for a moment, Smarmy waiting, the couple thinking.

‘We’ll take it,’ the husband says. ‘Has any one else expressed an interest?’

‘Yes. Several. But the owner wants to vet all prospective tenants himself.’

Again he is lying. I wonder why Smarmy is stalling. I suppose it is the hope of higher rent.

‘You know who I am?’ The man looks stern, but not unfriendly.

Disappointed, I realise the husband is not ordinary at all. But I don’t know who he is.

‘So it’s settled?’ the husband says.

Smarmy pulls out his phone, ‘Give me one minute.’ He strides off to the privacy of the library.

They are alone together without Smarmy for the first time. This, we both know, is when conclusions begin to form ahead of the brokering. The husband walks to the sofa and sits down. His wife watches him and then follows. She sits beside him. ‘So what do you think?’

I wonder if she is soft. I yearn for her touch.

She turns her lovely smooth face to his lined one. ‘You know that it’s only homeless people and criminals, don’t you? And a few people who choose it.’ Her eyes flash across the room to the portrait she hates. ‘I mean, it’s never anyone… normal…’

She is talking about the items in the room, easing her guilt.

He runs a flat palm over the arm of the sofa, feeling it.

She continues justifying, ‘I mean, if you could choose between freezing on the streets while starving to death, or living here, like this,’ she rubs the sofa, ‘It would be here, wouldn’t it?’

‘Why not be safe and warm? At least they’re alive. And they’re doing something useful for a change. Providing a service for people like us.’ She perches on the edge, elegant legs folded and tucked beneath her. ‘My sister will be so jealous. She’s only got a chair.’

He places a hand on hers. His face is neutral.

Smarmy returns, face happy. ‘Okay. It’s a deal.’ He is putting his phone in his pocket as he walks. He shoots out a hand. Remaining seated, the husband shakes it while being hugged by his wife who is bursting with excitement. He kisses her and then heaves himself up. He looks to where his backside has been resting. He felt the push, the extra help to stand.

‘Of course you can’t rearrange the furniture without re-plumbing the feed.’ Smarmy needed to say something. He chose a negative.

‘I don’t mind.’ The woman I now love buttons her coat, readying herself against the bitter weather outside. It has been a long winter; it’s always a long winter. She thanks Smarmy and shakes his hand. The husband does not and remains silent, offering no more than a nod of acknowledgement. I can see he is a powerful person, for only the powerful think they need shake a man’s hand only once.

They are looking at me. And now down to you, forever curled into an ornamental fluffy ball, no feed required. She remembers a question. ‘Pets? I have a dog.’

Smarmy’s face twitches with indecision. He looks to the husband. ‘I am sure it will be fine. Leave it with me.’

I think now he is not her husband, but some one else’s and I am glad. They walk towards me and I am proud to know that soon everyday the woman of my dreams will touch me, open me and close me, for without me she cannot get in.