‘The Cult of Following, Book One’ by Barbara Jaques 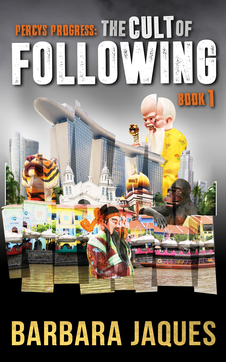 In Book One of The Cult of Following Trilogy, Englishman, Percy Field, takes his first uncertain steps towards a future no one could have foretold …

Misanthrope, Percy Field, is completely at ease amongst his reserved middle England community.  However, if he is to rescue his floundering marriage he must follow his wife and her job to Singapore.

Percy’s new home is exactly as he imagined it to be: too hot, too humid, too different, an annoying place where even his habitual comfort of picking fault doesn’t provide enough consolation.

Percy tries to improve his lot by making friends; a feat he has never before attempted, viewing it as unnecessary, undesirable and definitely not English!  With the help of Singaporean, Joyann Tann, Percy begins to navigate the treacherous waters of social interaction only to find that unknown dangers lurk beneath the depths.

The Cult of Following, Book One by Barbara Jaques

Percy Field swilled his drink round and round, collecting miniscule bits of foam from the sides of the glass, making the most of the warm beer he so enjoyed. ‘Yes,’ he said.

His friend pressed him. ‘And it’s the right thing to do? You’re sure? Isn’t it full of snakes and malaria and other crap like that?’

‘So you’re just going, just like that? To a swamp.’

’Just like that, to a first class city. It’ll be fine.’

‘So you’re sure it’s the right thing to do?’

‘But you hate travel, Fieldy.’

‘Yes. Moving. To Singapore, for Christ’s sake! What if it doesn’t work out? You can’t just pop back here to cheer yourself up.’ There was a pause. ‘Well, you could.’

’But not easily, or without spending a load of money.’

Releasing a long, steady sigh, Percy observed his friend. How he would miss Art. How he enjoyed these long evenings sampling craft ales and beers. Craft. It wasn’t even the correct term. They used it only because at some point in the distant past they had learned it was wrong, which meant using it became funny in some obscure way. This was not a replaceable friendship, but then, were any?

‘And Sal?’ Art persisted. ‘What does she think, now it’s really happening?’

Percy frowned. ‘Sal was happy enough to carry on as we were. But with her out there all the time, and me back here. It was making things tough. Not just the distance. The time difference. You know.’

‘So she wants to go? She’s choosing it? Her company isn’t forcing her hand?’

‘Visit, Fieldy. Be a tourist instead of an expat. Let her carry on with her travels and you stay in England. Just tag along every now and then.’

‘I can’t. I told you, we need to spend more time together.’

‘That would be more time together.’

Conversation paused while they each drew a mouthful of beer, followed by the obligatory ahhh that comes with satisfaction.

‘So when did you check it out?’

‘I knew it! You see! I told you so! You hate bloody travel. You haven’t even been to Singapore and you’re planning to live there. Who does something like that?’

‘Come on, Art. What’s the point of a trip like that? Sal and I need to be in the same place, so whatever I think of that place is irrelevant. It could be the fucking jungle and I’d go.’

‘It is the fucking jungle.’

Art shrugged. ‘Another?’ He pointed at Percy’s now empty glass.

Nodding, Percy shoved it towards him and watched Art take the few steps to the bar.

While Art leaned on the counter waiting to buy the next round, Percy rested back in his chair and looked about. There would be no pubs like this in Singapore. Sal had told him so. Maybe an Irish bar or two, but no real pubs. No dark brown furniture, questionable carpet, old panelled walls and studded bar stools, all made darker still in the dim orange light of wall lamps. But then, there weren’t many pubs like this left in England, either, so who cared. And anyway, he could come back and visit it sometimes. Couldn’t he?

Percy wasn’t sure what he could and couldn’t do, once they had moved themselves across those thousands of miles. Sal had told him about perks and privileges, flights home and bonuses, but he hadn’t been listening, thinking only that he suddenly felt trapped. If Sal carried on as she was, travelling so frequently, or if she moved to Singapore alone, the marriage would end. It made Percy’s heart sink to think of it, and so did his lack of choice.

How many thousands of miles was it, he suddenly wondered? He looked it up on his phone and drew a sharp breath. Nearly seven. Phone pushed back into his pocket, he shook his head a little. One thousand or seven, it made no difference. And it could be a good thing, that distance. It might offer a different kind of space, one where he couldn’t accidentally bump into someone expecting him to stop and chat. Cities in general were great places to be by oneself while not actually being alone; a foreign city could only enhance this, he decided.

There would be people‐watching, of course, which he enjoyed and was easy in a city. Sal had said as much, suggesting he could hide himself amongst the masses and observe life there. A solitary activity perhaps, but one that suited him for Percy was a man who enjoyed his own company, though truthfully when he was at home he enjoyed being alone less and less. These days the place seemed to creep with emptiness, a sort of isolation that touched on desolation. He knew it was to do with his marriage. He brightened at the thought of having this chance to fix it.

His gaze wandered across the sprinkling of patrons. Sal hated this pub, he mused, and he knew why. It wasn’t good enough for her, for more and more she enjoyed the finer things in life. Compared to Percy she was sophisticated, and from what he had heard, Singapore would suit her very nicely. For Sal, the pub didn’t contain anyone of worth. There were the annoyingly smiley bunch coming for the real ales and beers, and even Percy thought they were dull. But there was also Fat Malcolm, Young George, Big Geoff and Little Geoff, Pete, Mary, Scabby Edith and the bloke whose name none of them could ever remember; rarely all present at the same time as they were tonight, but always represented in some form or another. Percy rarely spoke with any of them, merely nodding and occasionally exchanging pleasantries, but unlike Sal he enjoyed the sight of them. Their presence brought with it a sense of reassurance and security. Home was a quiet place and here was often quiet too, of course, but home offered no security, only unease.

And there was Art. Art was like‐minded. He and Percy could be as sour as they wanted to be, and neither man judged the other. They just laughed at one another, with one another.

Percy caught Art’s eye as he turned from the bar, and smiled. With a large bag of crisps wedged under his arm, his friend returned and placed two brimming pints on the table, before tearing open the crisp packet into a makeshift platter.

‘Got a big head on it.’ Percy remarked, indicating the beer.

Crunching a crisp, Art offered the name of this latest sample. ‘Dogg’s End.’

Percy took a mouthful, ‘Taste’s like it.’ After wiping the foam from his lips, he held out his glass. ‘A toast…’

‘A toast,’ Art repeated, unsmiling, ‘to the future.’

‘To the future. Will you come out?’ Percy asked.

Art paused, and a smile grew. ‘Yeah. I think I might. When I have some money.’

‘Good.’ Percy cracked a smile of his own. ‘It’s going to be weird.’

‘Fucking weird,’ agreed Art. ‘But you’ll be all right.’

‘I know. I am looking on it as an opportunity.’

It was true, over the previous few weeks Percy had thought a lot about what he was leaving behind, and on realising that it amounted to his job, Art and some people he barely spoke to, decided that Singapore might offer something more. It didn’t mean he wasn’t sorry to be leaving England, nor did it much relieve the melancholy this coming change had provoked, but he recognised the worth in trying something fresh; something new in the light of something old staggering dangerously near demise.

For a few moments the men chose silence, drinking and eating companionably.

‘So when do you go?’ asked Art, once he had gathered the last tiny fragments of crisp on his fingertip.

‘What about your stuff?’

‘Where will you live? Have you found a house, or a flat or whatever?’

Percy released the second long sigh of the evening. ‘I’ll be able to work. Not doing my actual job or anything, but it’s allowed.’

‘Work. It didn’t used to be. Not for dependents.’

‘What would you do?’

Art shook his head, ‘Dunno. I’ve never been there. What is there to do?’

‘Exactly.’ Percy downed a huge draft of Dogg’s End, and once more his glass was empty. He pointed at Art’s, still a quarter full. With a wide mouth, Art finished what remained and passed it to Percy.