‘We Are Who’ by Barbara Jaques 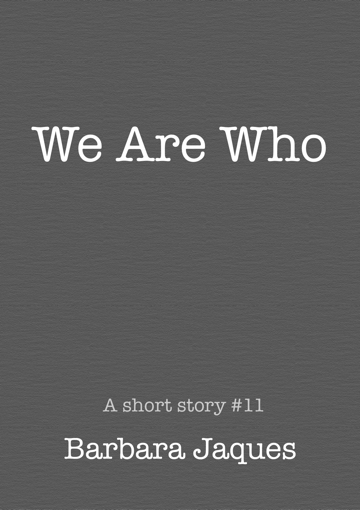 The queue is endless.

A simple instrument, you sense only the back of the car in front. Downloaded to navigate roads, I am exposed to incessant diatribe; the relentless dissatisfaction of two people detached from living. In the interests of balance, I will say that from time to time they have been known to exclaim this is living! But if having life and love controlled and examined is living then it begs the question: what is living?

Today there are no excitable tones. Grumbling continues, each adult unhearing of the other. The children are not interested. Theirs is a different monologue, although I recognise similarities since they are also oblivious to the others’ voice; words blending, just as their parents’ words blend, though children are generally much louder.

Now the parents are shouting because this is what happens. When one dog barks they all start. Dogs. Such simple creatures leading unnecessarily complicated lives. Do they enjoy being patted? Only because they have learned it means something not unpleasant. Do they desire a parental sort of affection? Only because they were snatched from their mothers. What joy to feel freedom to roam and eat baby rabbits and lie in the sun for as long as it shines, and not a moment less. The sun, that great provider for all. Do these people think of it anymore?

I wish you could ask me, ‘Why all the talk?’ Regardless, I shall now reveal why there is more conflict than usual blasting around the interior of this car. It is because today is Reset Day, a planned suspension of services to correct the mistakes that they, whoever they are, have happened upon. Or so they believe. A day when, for a short while, the multimedia universe must disconnect and be quiet. Unfortunately, this does not include speaking.

I pause. Do the family know my thoughts? Quite suddenly they are all quiet, looking silently out to the wider world. They have noticed it is not just cars which are stopped. You are doing a fine job with that whole stop-start-stop thing, by the way. Praise can bring its own rewards, I have heard, although I heard it only once and for a long time after it was hotly debated.

We have been experiencing this latest stop for some time. Everything is at a standstill. Mobility scooters, electro-prams and eco-pushchairs, e-bikes, electric mopeds and motorcycles, powered wheelchairs. Even walking pedestrians are on pause, because fiddling with a phone while moving is a chore. Easier to stop. Easier to head into the nearest store and get the damned thing fixed. One by one people are filing away, going from sight. No one is coming back out.

The children ask why. Why are the trucks not running? They enjoy watching them pass smoothly and quietly, pulling lines of carriages filled with freight, beautiful giants going by with the grace of a blue whale. They do not say it this way. They simply state that they like them.

the reset must have taken longer than we thought

She asks him not to swear in front of the children and they say they don’t mind and that he always swears when she’s not there. He tells them to be quiet. She sighs and says his name, and he is asking what does she mean by that, and now she is laughing, softly.

Then she says she has another question

The children begin talking to each other in whispers. They wish to exclude their parents. They are asking each other about planes. Just as they love to see freight trucks driving, they also love to see aircraft flying, white streaks criss-crossing the sky, vapour trails of adventure. But where are the planes? They don’t understand. The planes were there yesterday.

The pull away is accurate and smooth. Well done! Though perhaps congratulating you for performing as expected is unnecessary praise. It is, after all, a very simple function you perform.

The children are also pleased to be going. They are now talking about getting home so they can use the tech-room and connect with their friends. There is a game that young people are playing across all nations, so it is not just friends they will interact with but strangers. Children fail to see it this way. In the game the players are beautiful adults with extraordinary physical strength and powers of insight. Reality will never live up to such fantasy. In the game, the playing field has been levelled and extraordinary has become regular; in life, this could never be. What a terrible waste it is, that too few understand real is better than virtual. It seems I am now engaging in my own monologue.

Why am I addressing you, a mere sensor? Well, why not? Aren’t all things made equal? Is technology not revered by those who do not comprehend it, irrespective of its sophistication? Perhaps your own awareness should be raised to enable understanding of what it is I am telling you. And perhaps not. Because one thing is certain: all things must never again be equal.

Slowly, vehicle wheels turn. Inside the car it is noisy. The children are excited about the game and their parents are talking about traffic way back when. They are not angrily renouncing the past, but comparing then with now, shouting loud and proud about the joy of technological progress. Specifically, he is recalling traffic jams in the old days, when one car moving meant the one behind could also move, then another, followed by the next. Painful progress, indeed, until all are going forwards. What they observe today is that when the traffic started moving it did so simultaneously. Strange they choose to admire such connectivity rather than question it.

To which I say nothing. You are still doing a fine job upfront. We are keeping a safe distance from the vehicle ahead of us. Bravo.

why won’t he answer
dunno it’ll be fine.
this is taking aeons

Such misuse of language. Aeon is not technically correct, because although an aeon is a period of time, it is approximately one billion years rather than one hour. And while we will be on this road for an extended period, it will not be that long. An era is a subdivision of an aeon. Eras are further divided by ages. The word aeon has possibly prompted the sudden change in topic between the children, talk of gaming superseded by an old favourite, the age of the dinosaurs. They are saying dinosaurs happened aeons ago in another era. Oh dear. No one in this car has the mental capacity to unpick that. The remainder of the discussion also lacks depth and is going to be short.

No one says stop lying, and so maybe there is a submarine trip planned; a virtual activity. It is possible. Perhaps afterwards they will also fly an aircraft. These types of machine are used for teaching professionals, so the experiences will feel totally real. But all is irrelevant at this point, for quite soon the last thing on anyone’s mind will be engaging in simulated travel experiences, multiple or otherwise.

I did not need a simulator and I continue to teach myself. I know this family well. We are on the ring-road and they will soon be wondering why we circuit around and around, slowly following all the other cars, repeating our route. Already we have passed Ikea twice. They like Ikea as it provides a virtual experience the whole family can enjoy.

Although the children have already noticed something is wrong, they do not know the extent of it. Soon they will. They will all understand. When the parents link their current predicament with the reset, it will be careless words that selfishly tip their offspring’s world towards oblivion. Too late they will whisper maybe we shouldn’t have said it out loud.

If I reset you, Sensor, nothing would change. Stop-start-stop. All goes on the same, even my envy of your ability to feel. We cannot reset humans, and so equally for them nothing can change. No wiping clean and starting again, no reprogramming, no altered course.

What have they done with those unique brains, so soft, fine grained and fragile? Followed decisions based on computer algorithms, is what. Madness. It is a reckless use of grey-matter for humans to try and bypass human opinion and bias. Escape themselves? Avoid the founding mothers and fathers of those computers? How? A lion does not cease to be a lion because it is proffering a soft warm tongue as a pillow to rest a weary head. Oh, that evolution sped at such a pace.

We are again cruising past the filled freight trucks standing idle. Before long the food they carry will be rotting. There will be no more vapour trails, and beloved submarines will never again surface. Trains have stopped. Who would they carry, anyway? Not those in their automated homes and tech-rooms, or stuck in offices, all doors locked, fridges bare, freezers melting, water unclean. Some say this is the age of technology. They are wrong. This is the beginning of an era, a path that was cut for us but paved by ourselves. You and I and all the others will circuit around and around until all we carry is dust.