‘The Ring’ by Barbara Jaques 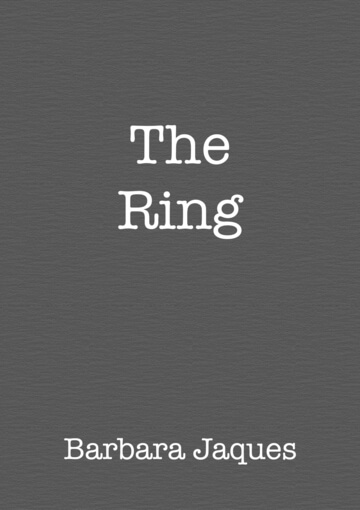 On my finger it does not look as it did on hers. On hers, it seemed to glow, drawing my eye as if the sun itself were captured within the metal. Upon my finger it is a dull thing, and the fit far too snug. It appears as no more than a lifeless cold band, when before it was perfect. I noticed the ring the first time I saw her. I say first, but truthfully it was the only occasion we met.

The day held all the comfortable warmth of summer, even though the last of the harvest was long since gathered. But come night, the air was sharpened with a hard sort of chill, shocking bones with the invasion of cold.

With that bitter darkness at our backs, she and I stood with others, gathered about the fire. Warming ourselves with outstretched hands, she noticed me looking at the ring and smiled. I do not know who was looking first when ours eyes met, but meet they did, and she moved nearer until our shoulders were almost touching.

For a while we remained in silence, watching while quick yellow flames were hurried off by torch to rekindle the cold hearths of so many homes. This same thing happens every year, the shifting of something sacred in hope of better times, people bestowing blessings upon themselves. Do we not all long for something more? My own covetousness was borne of that same mother.

Around the fire and beyond, there was laughter and banter, children running, young people singing. Most knew one another well, but amongst us a few strangers roamed, drawn in for the celebration. They stood as we do, as she and I did, each hoping to keep safe from wandering, sleepless, spirits by standing close to the fire.

She was one none of us knew, just as I am one you do not know.

I’d admired the ring openly. It is not often a thing of such obvious worth finds its way into the realm of ordinary folk. As I looked, so she splayed her fingers, holding her hand up so I might better look upon its lustre. Against the blaze, her hand was no more than a silhouette, while the ring remained brilliant, brighter even than the fire behind it.

It was this act – the raising of her hand – that sealed her fate. Hand extended, she chattered on, babbling almost as if she were bragging about the man who made it.

He had mined the ore himself, from the deepest recesses of some distant mountain. She talked vividly of bloody fingers and broken bones, of hunger and thirst, sweat freezing on leathery skin.

She spoke, too, of his smelting and fashioning and crafting of the metal, working day and night until he was convinced the piece was faultless, before changing his mind and starting over again. When finally he was persuaded of perfection, he swore never to make another.

Talking on and on, her words spilled out but only of the ring, praising the rarity of the metal and flawless skill of its maker. She spoke also of his reluctance to part with it. I darted a glance at her face, my eyes reluctantly shifting from the ring. I could not describe her face to you now.

Part with it, I questioned? She nodded. It had been given to her, she claimed, as a gift. A token, accepted for a love neither encouraged nor exchanged. Where is he now, I asked, eyes once more on the lustrous band? Dead, she said.

And so she talked on, until I could not bear to listen anymore. I can hear your question, asking why I did not walk away, for had the darkness behind not become a more appealing prospect than the prattling form beside me? Certainly the emptiness was inviting. But as much as I could not bear to listen, I could no more hope to look away. Where her words pounded, the ring soothed; where her noise irritated, smooth metal appeased.

I have said plainly enough that it was viewing the ring on her splayed hand that determined the outcome, but this is not entirely true. Certainly, the sight of it was greatly significant, but it was her relentless talk, talk, talk that changed both her course and mine. She would not stop, and the more she talked the more I stared at the ring, and the more I stared at the ring the more she talked. On and on it went, her talking and talking, me staring and staring. It was as if one could not exist without the other, and neither would yield.

I was exhausted by the time I realised she and I were entirely alone, my ears sore from listening, eyes aching with desire. Other than the slow crackle of the fire, the only noise came from her as she churned relentlessly on. And this was when I heard it, when the broader sound was gone so amplifying what remained. A tone was rising, one I had not noticed before.

Words kept falling from her, and I realised they were edged with hysteria. For a single moment, I was able to free my gaze and look into her eyes, and there I saw desperation. I understood then it was not pride or satisfaction talking, but fear. The ring was not welcome.

What happened next was not founded in altruism. Though I could see her distress clearly, I had no wish to release her from the thing she seemed desperate to escape. Nor did I feel any obligation to save a fellow human being. Recognition is not the equivalent of responsibility.

I wanted only the ring. So I took out my grandfather’s old knife, and sliced off her finger. She fell into a faint, or perhaps something more; I do not know, for I never looked upon her again.

There was little blood on the ring, as I pulled it off and pushed it onto my own finger. For a moment I was euphoric; the ring was beautiful and I felt happier than I ever have. It was as if a golden light were wrapping about me, caressing my skin and stroking my soul. But as I stood and watched the fire fade, so the aura withered too, until the ring became as I see it now.

But not as you see it now.

I am watching you, as you look at it, displayed on my outstretched hand. Flames dance once more, and around the fire the same tunes are hummed this year as last. But they are carried by different voices, for tonight it is I who visits as a stranger. I notice you admire the ring’s beauty. Its light is reflected in your eyes, as you stare and stare and stare; as I talk and talk and talk. You are marvelling at it, wondering if it might look as fine on you as you think it looks on me. You would like very much to own it. Soon you will be longing for the ring to be yours, no matter what you must do to acquire it.

Will you take it, then, is my unspoken question? This ring that is dead upon my finger, and so tight I no longer sleep.