‘Love of Grace and Angels’ by Barbara Jaques 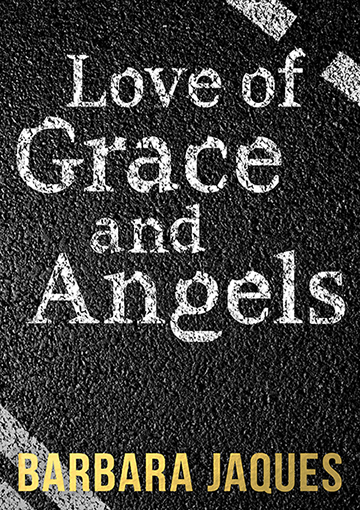 For thirty-two year old stalker, Ricardo Mancini, obsession has become an addictive force, so when he crosses paths with an unhappy but beautiful woman, she instantly fills him with desire.

While he relishes her attractive good looks, it is the inner beauty he sees that hooks him. But is it possible for a stalker to truly fall in love, when facts must always be forced to fit the fantasy? When infatuation drives every emotion?

Another encounter will also affect Ric, as the entire Saturday morning sees a collision of lives that will begin to test resolve.

“I love the dark humour, it reminds me of Tom Sharpe (Wilt, Porterhouse Blue)”

Love of Grace and Angels by Barbara Jaques

WE START WHERE NO ONE COULD

‘You can’t have said it very loud.’

‘You’re a liar. You always tell lies. You’re lying because you don’t like it that I saw something and you didn’t.’

‘I’m not!’ insisted the little girl, who might have flown at him for such a remark, but instead remained calm. ‘I saw her and I said everyone should look, but no one listened to me. No one listens. Not ever.’

‘Because you tell too many lies.’

‘No, because everyone thinks I am too little to know anything.’

‘You should have said it louder.’

‘So why didn’t you say something?’ she asked, ‘If you’re so clever.’

The boy paused. It wasn’t clear to him why he hadn’t. Why he’d watched the whole event unfold but not revealed anything of it. Not a word. Only the small gasp, the strange involuntary whisper that had come from nowhere and faded before it was heard.

‘It’s too late now,’ his sister said. ‘They’ll want to know why you didn’t say. You’ll get into trouble.’

‘Thought you said I was lying?’

‘Prove it then,’ offered the boy.

Thwarted by her brother’s logic, the girl began, ‘I saw her when we stopped for the phone …’

‘I saw her before that, while we were still parked,’ the boy interrupted, unable to resist the taste of triumph.

‘I saw her before that,’ countered his sister.

She smiled, ‘I was tricking you. I saw her before you did. Definitely.’

He sighed. She was five. She probably hadn’t seen anything. ‘How could you see, anyway? You were in your car seat.’

The two were silent for a moment. The house was also quiet, the rest of the family outside in the garden, mother weeding, baby brother watching from a bouncy seat. Dad was working again, but it wasn’t the weekend for him anyway.

‘We could tell,’ said the sister, performing a mental u-turn. ‘You could tell Mumma what you saw.’ She was stretched out tummy-down on the floor, face turned towards the round, golden hamster sitting patiently next to her. She offered it a piece of green Lego.

‘Don’t give him that,’ said the boy, crossed legged beside her.

The boy took it, and threw it out of reach. Ordinarily his sister would have wailed angrily at this, but this was no ordinary day.

‘And why should I tell, and not you?’ he asked.

‘You saw her first.’

The little girl rolled over onto her back. ‘You know when we stopped for Mumma to answer her phone?’ she asked, looking earnestly at her brother.

‘I really did see her then. Did you really see her before?’

The boy sighed. It was true. He had seen her while they were still parked, delayed because Mumma was lecturing on the importance of quietening down, so she could drive safely. They had just got into the car after dragging around the shops for sports shoes, because his were falling apart, when Mumma had made them laugh. But then the noise grew too wild, and she had snapped. She had snapped, she said, because they had ignored her when she’d asked nicely. Speaking for himself, the boy hadn’t heard her ask nicely at all.

‘Could you really see what happened? Properly?’

‘Do you think she is dead?’ asked his sister, matter-of-factly, eyes now locked sideways on the busily grooming hamster.

The boy shrugged. He hadn’t thought of that.